Abolition and Defunding the Police

We recognize that these topics are being heavily debated, and may not even be solved in our lifetime. We know that people have different experiences and opinions regarding how to solve them, and these opinions range incredibly widely on this seemingly unsolvable issue. These are resources we found interesting, thought provoking, powerful, and/or important to read. These issues may be sensitive, but we will promote what we believe in. At the end of the day, everyone just wants the world to be a better place. This is how we believe that can be achieved.

"As nationwide protests over the deaths of George Floyd and Breonna Taylor are met with police brutality, John Oliver discusses how the histories of policing and white supremacy are intertwined, the roadblocks to fixing things, and some potential paths forward."

TW: Murder and suicide.
Taken from @the.mirror on Instagram:
​
How poverty is criminalized.

"I want to continue building on my last couple post that talked about prisons and policing. This zine is a little explaining of how they money bail system works and helps us dive deeper in understanding the complicity of prisons. ———--
Graphics by @mama____lucha "
In response to comments about the headlights part:

"Hi, creator of the graphics here. Folks who think this is a commentary on busted headlights are engaging in something called a “strawman argument”. They know that what we’re talking about has less to do with auto parts and everything to do with a system they are complicit in. Sending my love to all who have been criminalized for being poor, for being low income, for just trying to survive. You are not alone and we are more powerful together ✨"

Here’s an introductory breakdown into prison abolition, why people have been calling for it, and how it’s relevant today.

This is by no means comprehensive, and we encourage people to share more resources in the comments and with us, so we can all learn more together.
Photos and information taken from @theslacktivists

Articles about Policing in America 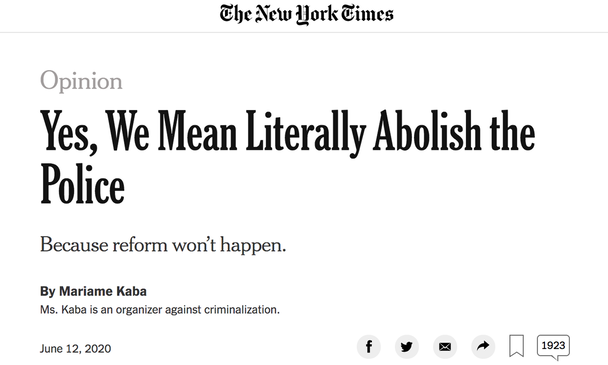 Spent some time reviewing some budgets this morning. This is specific to NYC, but maybe it will raise some questions in you to consider your city’s budgets, where most of the funds are going, and what is meant by defund the police. George Floyd was murdered by police who were responding to a call about a fake $20 bill. Black people are 3x more likely to be killed by police than white people. Do the police really need to be called for a fake $20 bill? What else are they responding to? Who might better be able to respond? Where can we invest in those services? What are some ways to push leaders on a divest and invest model?
Infographic taken from @auntsarahdraws

The Justice System was never created to protect Black People

"The answer to police violence is not 'reform'. It's defunding. Here's why" by Alex S. Vitale 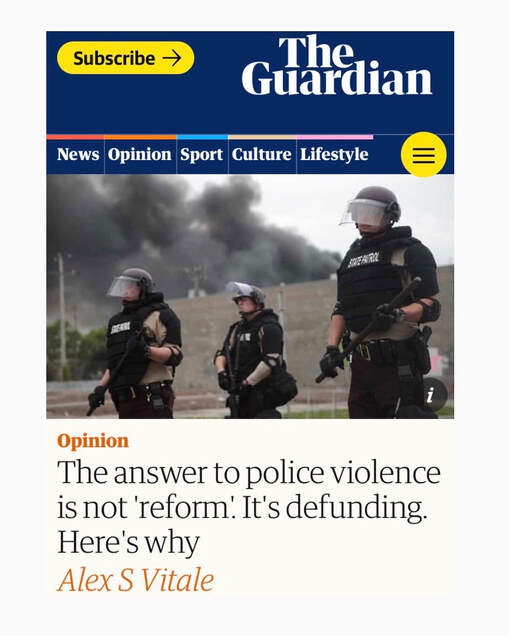 "The alternative is not more money for police training programs, hardware or oversight. It is to dramatically shrink their function. We must demand that local politicians develop non-police solutions to the problems poor people face. We must invest in housing, employment and healthcare in ways that directly target the problems of public safety."​

"Angela Davis: ‘We knew that the role of the police was to protect white supremacy’" by Lanre Bakare

Angela Davis is an incredible scholar and an incredibly important part of American history in the fight towards justice. It's definitely worth looking at her writing and acknowledging her life and her role in change in America, as someone who was able to stand against so much at such a young age. This article summarizes aspects of her life and is a worthwhile and quick read, as well as bringing up many points about police brutality in America, white supremacy, and its effects on the past few generations and how that's affecting our current generation. It's good to know the faces and leaders of some of the people who brought us to where we are today, and who are still fighting to further us. Everybody is capable of making change. 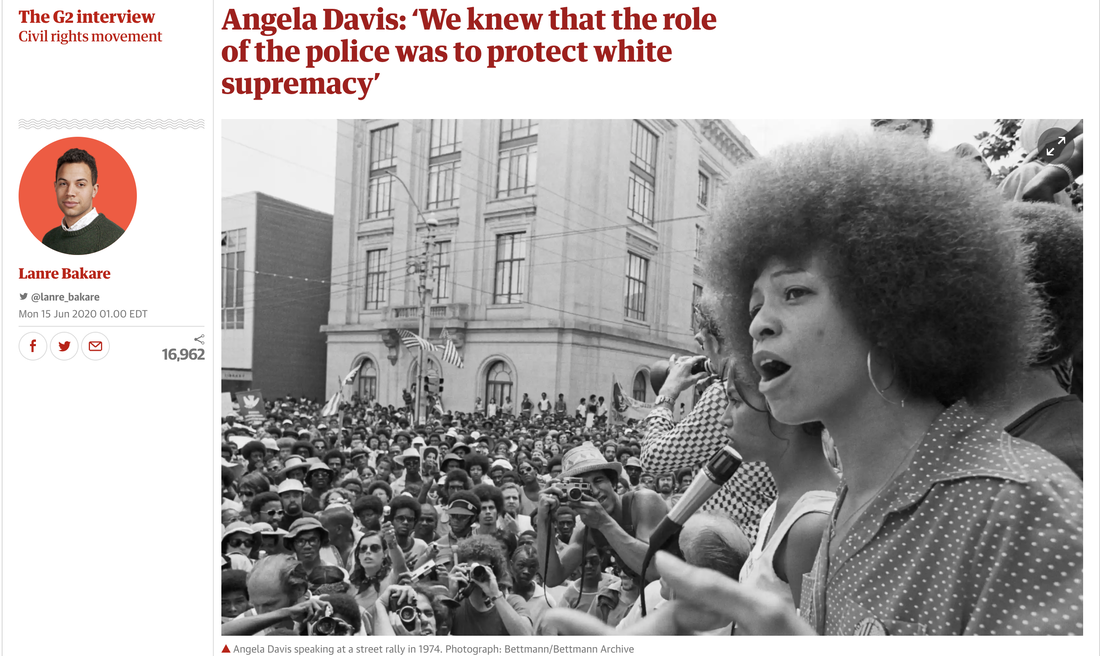 "It is 1972, and Angela Davis is answering a question about whether she approves of the use of violence by the Black Panthers. She is sitting against a backdrop of powder-blue breeze blocks, the walls of a California state prison cell. Dressed in a red turtleneck, with her signature afro and a lit cigarette, she stares at the Swedish interviewer – almost straight through him – as she delivers her reply: “You ask me whether I approve of violence? That just doesn’t make any sense at all. Whether I approve of guns? I grew up in Birmingham, Alabama. Some very, very good friends of mine were killed by bombs – bombs that were planted by racists. I remember, from the time I was very small, the sound of bombs exploding across the street and the house shaking … That’s why, when someone asks me about violence, I find it incredible because it means the person asking that question has absolutely no idea what black people have gone through and experienced in this country from the time the first black person was kidnapped from the shores of Africa.”

Be Aware of Past Mistakes

There is currently a lot of news circulating about Camden being a model for defunding/abolishing the police. It‘s true that, after Camden disbanded and re-assembled its force in 2013, violent crime rates did fall. But in the years since, Camden police have nearly doubled in size and operate on a $70 million budget for a town of 70,000 people. Camden police were not defunded. Instead, the city is now a model for gentrification and ubiquitous, invasive, “predictive” surveillance that criminalizes the smallest offenses and threatens to see individuals only as their potential crime. It is imperative that we not use this totalizing surveillance state as a blueprint for public safety. This policing reinforces existing socioeconomic disparities and introduces new risks and harms — including those not visible via homicide statistics. What we need are policies that take money and scale away from cops and invest it into housing, education, food, jobs. There is a way we can reduce the harms of policing AND create public safety: abolition. •

NOTE: I am not an expert but I am learning from those who are. The info in this graphic is applied from organizers and researchers whose works reflect and/or amplify the voices of Camden residents. There is a substantial amount of data and detail from their research that could not fit here, and I urge you to read the words of organizers in the local NAACP chapter, Dr. Brendan McQuade, Dr. Keith Benson, and Dr. Stephen Danley. I have Dr. McQuade’s permission to share PDFs of his book — please DM me your email for a copy! Perennial recs on abolition: Angela Davis, Mariame Kaba, Alex Vitale. DM for these readings too! •

CORRECTIONS: BG’s budget is $20MM; it is their future appropriations budget that is $1.5MM.
​Second, MPLS did not *vote* to disband. They passed a veto-proof resolution to *eventually* develop a new model of public safety.

Of course, it's not perfect and nobody has it all worked out yet, but it's important to take steps forward to protect our communities and the people we care about. There are other literary resources that break this down much more in depth, and we linked some free ones for you, but here are some brief overviews to help you explore alternate possibilities.
" Some resources I gathered to consider in NYC (and specifically Brooklyn) instead of calling police. Once we recognize the harm law enforcement has on marginalized communities, it is our responsibility to not bring them into our neighborhoods when we don’t need to and risk further harm.
Using a divest/invest model these are the types of organizations that will receive much larger funding that will allow to go even further than their current capacity. These are the type of orgs we need to become familiar with so we can increase their use within communities.

If you are in immediate medical or physical danger, please call 911.
UPDATES: @iamwomankind is another domestic violence resource that has a large language capacity.

Someone sent me a DM letting me know their friend had a blatantly islamophobic experience with CCM Brooklyn. I’ve gotten another message from a former employee of CCM saying they suffered a transphobic and ableist experience!!!! "
Photos and information taken from @shan_ia_twain on Instagram
Incredibly short but helpful infographic about different scenarios and how they play without police interference
Images taken from @collectiveresistancect
Disclaimer: We would like to say that you should always prioritize your own safety. Don't be naive and put yourself in an isolated situation with a stranger. The purpose of this infographic was to show that there are always more possibilities to handle different situations.

(Free) Books You Can Read

This book is was free* for download as an Ebook on Verso Books, the largest independent, radical publishing house in the English-speaking world. It is now $3.00 to download. (Email us for a pdf copy tho) Click the here to download!

(Yes, THE Angela Davis!)
Read Are Prisons Obsolete online free:
Angela Yvonne Davis is an American political activist, philosopher, academic, and author. Davis was born on January 26, 1944, in Birmingham, Alabama. She grew up in a middle-class neighborhood dubbed "Dynamite Hill," due to many of the African American homes in the area that were bombed by the Ku Klux Klan. Davis' father, Frank, owned a service station, while her mother, Sallye, taught elementary school and was an active member of the NAACP. Sallye would later pursue her master's degree at NYU and Davis would accompany her there as a teenager.
Davis is best known as a radical African American educator and activist for civil rights and other social issues. She knew about racial prejudice from her experiences with discrimination growing up in Alabama. As a teenager, Davis organized interracial study groups, which were broken up by the police. She also knew some of the four African American girls killed in the Birmingham church bombing of 1963.

The first link doesn't seem to work anymore, but the second still does, so
click HERE to access
DOZENS of works by some of the greatest thinkers of our time
Photos and caption taken from @tatakpilipino

"Read and educate yourself. Stop asking Black people to teach you and relive their traumas as if it’s something to glorify. True allyship is doing the work and being proactive about being uncomfortable and critically thinking about your own behaviors and thoughts. SHARE SHARE SHARE ‼️‼️‼️
.
Free online PDF copies of several Black revolutionary texts by Black writers and activists. Links on the second slide! 🧡✊🏾
.
If you are able to buy the physical book, do not purchase from Amazon. Support Black writers as directly as you can. Support Black owned bookstores."